The manufacturing process for both Xantham Gum and Gellan Gum are very similar:-

Xanthan gum is produced by aerobic submerged fermentation using the bacterium Xanthomonas campestris, a micro-organism which is found naturally on cabbages.

Gellan gum is produced by the same process using the bacterium Pseudomonas elodea.

There is a multi-stage inoculum build up from agar plate to shake flasks to small seed fermentation vessels to large final fermentation vessel. At all stages of production, fermentation equipment is thoroughly cleaned and sterilised before use and strict aseptic techniques are followed to ensure the culture is pure and without contamination.

Once the final fermentation is complete, the contents of the vessel are pasteurised to kill all the bacterial cells used in the initial culture and optimise the conformation of the polymers.

The gums are recovered from the fermentation broth, by addition of alcohol (usually isopropyl alcohol) causing precipitation of xanthan and gellan fibres.

The resulting fibres are then treated to remove the excess alcohol and dried under careful conditions.

The resulting “cake” is ground milled into a powder and packaged in a controlled environment.

The final Xanthan gum and Gellan gum products are subject to extensive Quality Control testing before being released for sale.

DIAGRAM: The Manufacturing Process diagram for both Xanthan and Gellan gums 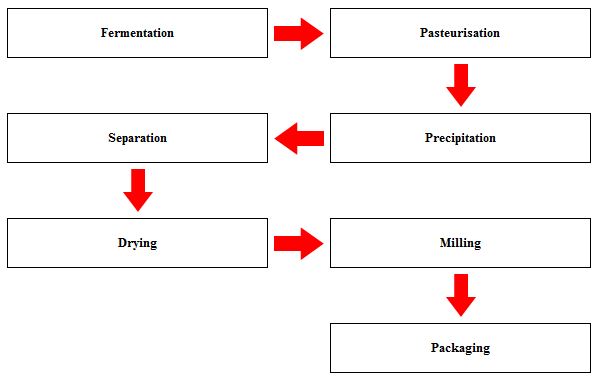